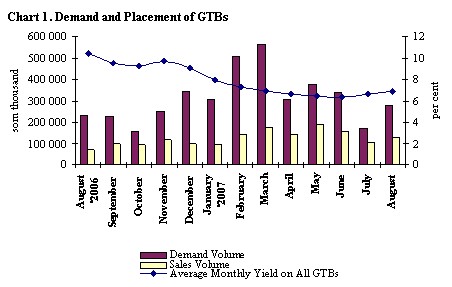 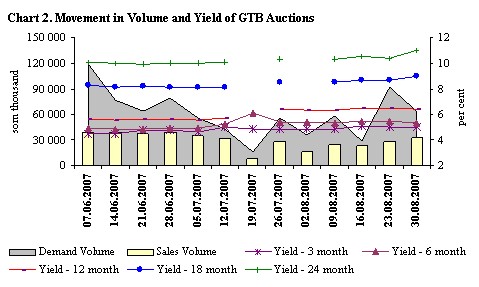 In the first half of August, the commercial banks’ activity in primary market of the State Treasury Bills remained quite low against the background of decrease in the liquidity of the banking system. It influenced some increase in bills yield; in the first week of the month the auctions on the placement of 18-month and 24-month STB were invalidated due to the insufficient number of participants. In the second half of the month, with increase in the liquidity of the banking system, the demand for STB increased; at the same time, the volume of STB emission increased as well. As a result, the yield of short-term and annual bills almost didn’t change, and the yield of 18-month and 24-month STB increased in the auctions for the last week of August. 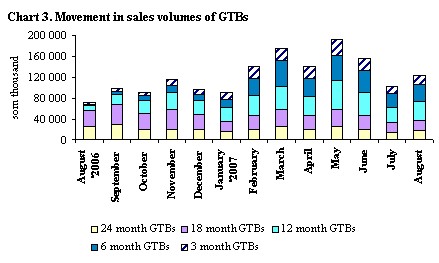 On the whole for the month, the overall weighed average STB yield increased by 3.3 pp compared to the previous month, and made 6.9 per cent. At the same time, the yield of bills increased throughout all segments, and the most significant increase was marked in the segments of long-term STB (12-month, 18-month and 24-month STB). 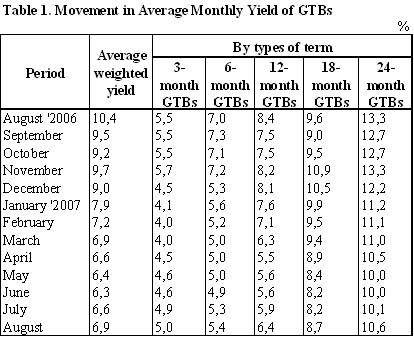 The weekly average volume of requests for STB purchase increased by 31.6 per cent for the reporting period and amounted to KGS 56.1 Million. At the same time, the sales volume decreased by 2.3 per cent and amounted to KGS 24.9 Million on average for the week. The share of long-term STB in the overall sales volume was down from 61.7 to 59.3 per cent.

The overall STB volume in circulation almost didn’t change for the reporting period and amounted to KGS 1,674.4 Million. The maturity of bills came down from 262 to 251 days. Amount of net budget funding by STB in August was negative and amounted to KGS 4.0 Million; year-to-date it made KGS 376.8 Million.

In the structure of STB holders, the share of commercial banks didn’t change and still remained considerable, having made 98.2 per cent as of the end of the reporting month. The shares of resident individuals and resident legal entities almost didn’t change and amounted to 1.1 and 0.8 per cent, correspondingly. The number of banks holding the State Treasury Bills did not change and made 18. The STB bank portfolio concentration index increased from 0.21 to 0.23, which was equivalent to the market presence of four bank players with equal shares and indicated a high level of concentration.

In the secondary market of STB, no transactions between commercial banks were performed in August.