ь On March 30, 2011, in the course of session of the Board of the National Bank of the Kyrgyz Republic, the following issues were considered and corresponding resolutions were accepted:

­ On introduction of changes and amendments to the Instruction “On the procedure for settlement of payments in the System of Package Clearing of Small Retail and Regular Payments in the Kyrgyz Republic” (№20/6);

­ On introduction of changes and amendments to the Instruction “On the procedure for transfer of electronic messages through the Gross System of Payments on a Real-Time Basis in the Kyrgyz Republic” (№20/7).

The National Bank of the Kyrgyz Republic issued licenses/certificates to the following non-banking financial institutions and exchange offices:

The National Bank of the Kyrgyz Republic revoked certificates/licenses from the following Non-banking financial institutions:

3. License No. 4463 of the Exchange Office PE Kasymov Nozimjon Nasurdinovich., dated July 28, 2010, has been canceled from March 28, 2011, due to termination of activity. Legal address: central market, Jalal-Abad city, Jalal-Abad oblast (orienting point: 1st passage of the market from the side of municipal administration);

How to differentiate between original and counterfeit 500-soms banknote?

· Absence of relief and unevenness in the zone of signatures and portraits;

· Absence of latent image of numeric nominal in the square, placed in the right bottom corner of the banknote.

If you have a doubtful banknote, it is necessary to bring it to the neighbor department of internal affairs or to the National Bank of the Kyrgyz Republic, where specialists will make expertise of the banknote’s authenticity. You should not try to market a doubtful banknote, because not only production but also distribution of counterfeit banknotes is punished by law. 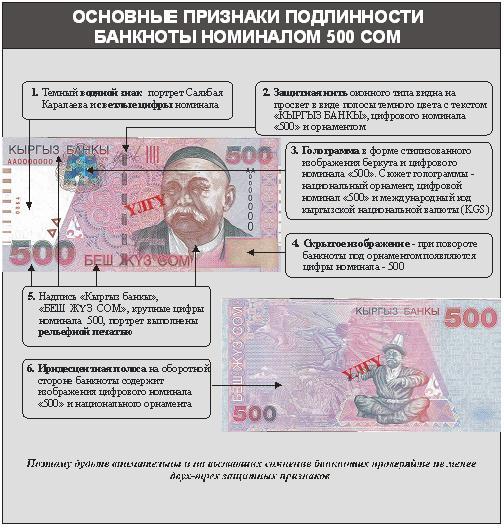