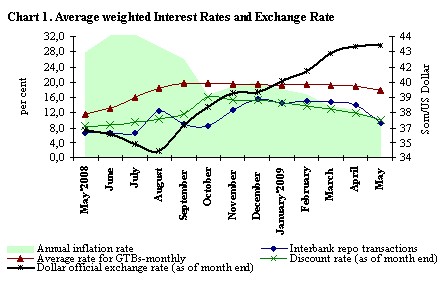 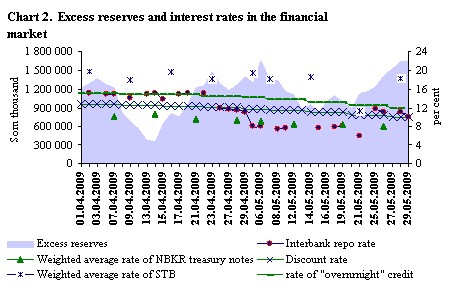 In May the situation in the financial market was formed under the influence of high liquidity rate in commercial banks, that affected the demand decrease for KGS borrowed resources in inter-bank market of credit resources and the demand increase for state securities as well as decrease in interest rates in those segments of the market. The volume of transactions in the national currency in the inter-bank market of credit resources increased by 62.6 percent within the month and constituted 546.3 million soms. The decrease was due to the reduction of repo-transactions by 56.8 percent up to 426.3 million soms as well as the credit transactions by 74.7 percent up to 120.0 million soms. The weighted average interest rate on repo-transactions decreased by 4.7 percentage points and constituted 9.1 percent; the rate on credits in the national currency decreased by 2.6 percentage points and constituted 7.9 percent.

On the primary STB market in May, the Ministry of Finance decreased the volume of STB supply. At the same time the demand for state treasury bills increased and within the month it exceeded the supply rate that affected the STB overall profitability rate by 1.1 percentage points to 17.7 percent. The average weekly demand increased by 14.1 percent and constituted 205.5 million soms whereas the weekly average volume of sales decreased by 18.9 percent to 73.0 million soms.

The KGS weakened against other major currencies: within the month the weighted average EUR selling rate in exchange offices increased by 5.2 percent and constituted 60.0797 KGS/EUR by the end of May, Russian Ruble – by 7.8 percent up to 1.3894 KGS/RUB and KZT – by 0.6 percent up to 0.2866 KGS/KZT.

The National Bank of the Kyrgyz Republic in May did not perform tenders on STB sale on REPO-terms. Commercial banks did not allocate funds on the NBKR fixed-term deposit accounts.